Apparently my newfound sense of self-confidence may end up getting me into trouble. I don’t consider myself a trouble maker, either. Unlike my boyfriend who tends to get kicked out of places, I like to fly under the radar and go unnoticed in a crowd.

But this week I did something that surprised me. I’m not ashamed of what I did—as a matter of fact, I’m pretty proud of myself.
We live in one of the older neighborhoods of Richmond Hill. It’s small and self-contained—only two streets and they come together in a loop near the back end and we are surrounded by a small creek and wooded tree line. My house is on the back end of the loop.
Jude and Veronica take the bus to and from school every day. Veronica rides the special ed bus to accommodate her wheelchair, so it stops at the end of my driveway each day to pick her up and drop her off. Jude has the option to walk down to the end of either side of our road to catch the bus. He chooses to ride his scooter or bike down to his friends’ house each morning so they can hang out and shoot some hoops while they wait for the bus.
The problem is that in order for Jude to get to his friends’ house he must go around a corner where some idiot planted a row of evergreen trees. Over the past few years these trees have grown a lot and now they completely block the view on either side of the curve. Every day one of the children in our neighborhood has a close call with oncoming traffic because drivers can’t see the children on the road until after they pass the trees.
About a month ago, a driver had to slam on her brakes in order to not hit Jude and his pals riding their bikes. I saw the entire incident unfold and for a brief moment, I thought my child was going to be killed by a speeding teenager. 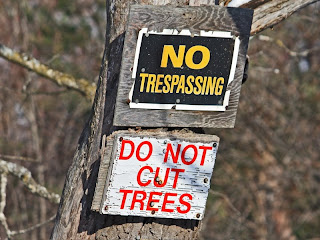 The trees sit on a foreclosed property. So, I dialed the number on the realtor’s sign in the yard and spoke to the person in charge of selling the home for the bank. I explained the situation about the trees and she came to the house the next day and took pictures to send the bank. The bank’s response was, “We’ll think about it, but removing trees is expensive.”
Last week, I called the city and explained the situation. Their response was, “We don’t cut down trees in people’s yards.” So, I called someone else at City Hall. Their response was, “We don’t remove trees unless they are in danger of falling on power lines. And in that case, the electric company would take care of the trees.”
My response was, “What is your stance on paying for funerals of dead children?”
I hung up my phone and decided that I wasn’t going to wait for one of the children on my street to be hit by a car. My garage is filled with tree cutting devices—hand saws, axes, and clippers. With the weapon chosen, I decided to wait until dark and make my move on the trees.
On Wednesday night, I put the kids to bed. I washed the dishes, folded the laundry, and organized the mail. At 10:00, I sat down to watch an episode of Dexter. At the end of the show, I put on my boots, jacket, and gloves. I grabbed my flashlight and handsaw and walked down the street.
I’m not good at sneaking around so I was a nervous wreck. I kept thinking that I heard a car coming or someone walking up behind me. I crouched down on my knees and laid the flashlight on the ground so the light was focused on the base of the biggest tree. I began sawing through the wood like my life depended on it.
It seemed like the creak, creak, creak sound of the saw was going to wake up the neighborhood, but I began to calm down and focus on the task at hand. My arms were beginning to tire and I realized that I was being stupid for fearing someone would catch me in the act.
“I’m doing them a favor,” I thought. “This is the right thing to do and I should have done it months ago.”
I sat back on my heels and wiped the sweat that was running down into my eyes. “This is ridiculous,” I thought. “I’m coming back tomorrow and finishing the job during the day.”
I stuck my flashlight in my pocket and walked home with the saw in my hand. “I hope the cops don’t drive by right now.”
Yesterday afternoon I finally finished the job I started—I finished it in broad daylight and not a soul noticed. In the end, I cut down 3 trees and I stacked them in the driveway of the foreclosed home. I’m not sure if what I did was illegal, but I know it was the right thing to do.
On my way home, I stopped by my neighbor’s house and told her what I did. “Good for you,” she said. “I hate those trees.”
I guess we’ll never know if I saved any lives—I wasn’t willing to “wait and see” what would happen. I told Veronica and Jude what I did and explained to them why I did it. “I’m proud of you, Mom,” Veronica told me.
This morning, we got up to leave the house for Jude’s karate class and the kids noticed our neighbor’s had also cut down their trees in their front yard (completely unrelated to my trees). Jude’s eyes got big and said, “Whoa, Mom, did you do that, too?”
I laughed and said, “No, honey, my tree cutting days are over for now.”
Even though I shouldn’t need to cut down any more trees for a while, I hope I continue to remember that it is easy to “wait and see” if others around me are willing to step-up and do the right thing. It’s hard for me to step out of my comfort zone and do what I know is right. Doing the right thing is usually never easy, and I may end up getting into trouble for what I did. But I don’t regret a thing and I would cut down a hundred trees if that is what it takes to keep my children safe.
Posted by Kim Wade at 1:01 PM