Once again I find myself doing something that I swore I would never do—I’m getting married again. And to top it off, I decided last week that we should have a wedding rather than elope like we had originally planned. What’s even crazier is that I’m not even panicking yet.

I guess I have come to some sort of peace about getting married again which makes the wedding feel so right. It’s obvious that the kids need to see Robby and I tie the knot. But I’m surprised by how happy this wedding is making everyone else. I guess they see our love and they just want to see us happy after the hell we both have been through. It’s the kind of love fest that makes single people want to claw your eyes out.

So with the wedding on Memorial Day weekend, it looks like we will be married before we move in together which on some levels solves another dilemma I had—I swore I would never live with someone I wasn’t married to.  But to be honest, that doesn’t really matter to me anymore either.


It’s not that my values have changed. I still want to set a good example for my children. I just don’t sweat the small things that I used to think were so important. Basically, I guess I just don’t care what people think about me anymore--at least that is what I try to tell myself..

I know I’m a good person. I know that I am a good mother. I no longer secretly hope that everyone else agrees with me--at least that is what I try to tell myself and my therapist.

This isn’t a change that happened overnight. I didn’t even realize it had happened until I realized that I was making plans and not worrying too much about what people would think.

I’ve always been a people pleaser. My mom will be the first to admit that the dynamic of our family instilled the idea in my head that it was my job to make everyone happy. “You just always wanted to make everyone laugh,” she told me. “We put too much pressure on you to be the cheerleader for the family. It was wrong, and I’m sorry. You deserve to be happy.”


Perhaps that’s true. I do know that this need to make everyone happy was made worse by my marriage. Despite our split, I really did love my first husband and I really wanted to make him happy.

The problem was that nothing ever made him happy. Nothing was ever good enough. The harder I tried, the harder it got. And like my parents, his mood would change in a second. I never knew when he would get angry or frustrated or depressed. I never knew when I would be forced to be the cheerleader and try to make things good again.


I’m not cured though. I find myself falling back into these old habits almost daily. I’m getting better. I don’t feel as guilty as I used to when the children are disappointed or if Robby is bummed about something that happened at work. I don’t feel that it’s my job to make everyone happy--well, sometimes I feel this way.


I do know that if I don’t continually work on this need to make everyone happy, then I will lose myself again. Everyone will be happy except for me and I don’t want to end up in that place again. Robby and the children deserve a happy Kim and I want to give them that.


I caught myself falling into those old habits when Robby and I started planning the wedding ceremony. Venues in downtown Savannah were more expensive than we planned for. I immediately felt the need to back down on my expectations. The wedding cake we priced at Publix was more than we really wanted to spend, and I began to think of other alternatives to keep the peace on price--to make Robby smile. 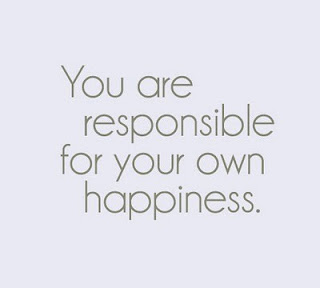 For those who know Robby, they probably find this funny. He’s the least overbearing person on the planet and if I asked for something, he would do everything in his power to get it for me.

So, I had to remind myself when I felt that twinge of guilt in the pit of my stomach about prices, that it was okay for things to be a little difficult. It’s okay to see the disappointment on Robby’s face when he finds out it will cost $300 for the cake I want. It’s not my job to make everything painless. It’s my job to make sure I am happy. No one else can do that for me and nothing around me seems to work right when I’m always trying to please everyone else. And even though it’s still a daily struggle to focus on my happiness and even though I still feel guilty when I get my way, I realize that it’s going to be okay.


I swore to myself several years ago that I would never allow myself to be unhappy again. This is one promise I really need to keep.
Posted by Kim Wade at 3:55 PM