God, grant me the serenity ...

I’ve made it through the first week of the children being away at their father’s house—well, almost, 6 p.m. is technically one week.

It’s tough. I wake up every morning, realize they are still gone and wonder if they are okay.

There were times when I was kid and my parents went out of town and left us with people. Sometimes it was strangers and most times it was my grandparents who lived in Seguin.

For the most part, we liked going to the house in Seguin. It was a huge home out in the country that had a trampoline (luckily we remembered where the holes were and where to jump) and sometimes it had a pool. But it always had lots of space to explore and it was always an adventure. 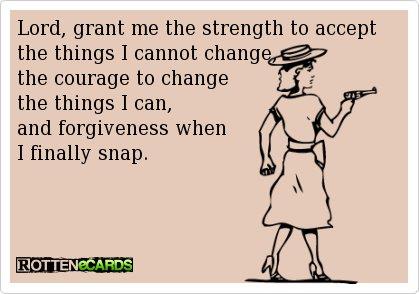 After a while, it was obvious my grandparents were tired of us and were irritated with my parents for not coming sooner to retrieve us.

But we were children and that also meant that our feelings were less important than adults—at least that was the way I grew up.

Instead of staying in the large house, we stayed in the “guest house.”

The guest house was really a small one-room trailer that didn’t have air conditioning for the first few years. Did I mention how hot south Texas gets in the summer?

It was also infested with mice, roaches and scorpions that would run across our legs at night time and wake us up.

But we had each other. I’m not sure what life would have been like if it had not been for my sister Amy and my brother David. Luke came around later and wasn’t subject to those “vacations” at people’s homes—mostly because we were able to stay home alone and could watch Luke while my parents were out of town.

It makes me feel comfort to know my children at least have each other while they are gone, but still it’s tough. It still sucks to be homesick.

Someone mentioned that I should have mentioned “forgiveness” in my last blog when I wrote about the unfairness of share custody.

It’s true on some levels, but for me forgiveness has been a tricky topic.

I think we are all programed to believe that we have to forgive people who have wronged us in order to move on and have healthy lives.

I know I believed that if I could just forgive my ex then everything would fall into place for me and we could all live happily ever after.

That is partly true.

You can forgive someone for something really bad and move on. I did.

I have forgiven my ex for causing us to have a divorce. I’m grateful every day that I was given the chance to get out of that doomed marriage and have the chance to have a normal and healthy marriage. It’s obvious now that he and I weren’t meant to be together forever, so I can easily forgive him for that.

I’m glad that the divorce led me to counseling where I had the chance to dig deep into my childhood and open my eyes to the fact that I had some serious issues that I needed to deal with in order to have normal, healthy relationships.

But forgiveness is something you have to do over and over again when you have to constantly deal with someone who is destructive, deceptive and hard to get along with.

It’s hard for me to constantly forgive over and over again, especially when I see my children sad.

My parents are reflective and humble enough to admit that leaving us with strangers and with grandparents who were not the best caregivers in the world was a mistake. They have apologized.
I forgive them.

It’s easy to forgive something like that—especially when the apology is sincere.

But if my parents continued to be destructive to me and my children, then that would bring in another level of me being angry with them. It would take me back to the times in my childhood when I needed them to protect us and they didn’t.

See, it’s hard to be truly forgiving and all “light” and “love” when someone says “sorry” out of one side of his mouth and then does the same old shit again and again.

So, yes, forgiveness is very important, but sometimes it comes down to finding forgiveness for yourself rather than others and sometimes we fail to see the difference or understand why we need to forgive ourselves.

I’m working to forgive myself for putting my children in this situation. Some days are easier than others.  It’s hard not to feel constant guilt when you are a parent—that’s how good parents are wired.

But guilt is a dangerous feeling that can force you to do things that are not healthy or make you feel so bad about yourself, you find yourself in a deep depression.

So, enough with the guilt already.  I’ll work on the forgiveness.

And for the next week, I’m going to continue to stay as busy as possible and pray everything works out the way it was meant to be.

And when things get tough, I will continue to tell myself a simple prayer that has gotten me through a lot of the guilt that comes with divorce/co-parenting:
“God grant me the serenity
to accept the things I cannot change;
courage to change the things I can;
and wisdom to know the difference.”