I quit for a good reason

Today was Martin Luther King, Jr. Day. Living in Savannah, GA, this day is definitely observed and celebrated. Growing up in Dublin, TX, we finally got a day off of school when I went to Jr. High School, but we got the day off for Stock Show Day, not MLK, Jr.

I’m glad my children are growing up in a place where this holiday matters and they get at least 2 full weeks of lessons in school teaching them the importance of Dr. King and his journey. They have learned the importance of sacrificing a bit of their own happiness to ensure others have the freedoms and opportunities in life that they deserve. While we didn’t do anything significant to celebrate this day, something did happen that will make this very special to me.
Veronica sat in her bedroom this afternoon and took off her shoes, leg braces, and socks all by herself for the first time ever today. For most people, taking off shoes and socks is a mundane event that happens several times each day. But for an 11-year old girl with a disability, taking off socks and shoes on her own is quite a challenge. 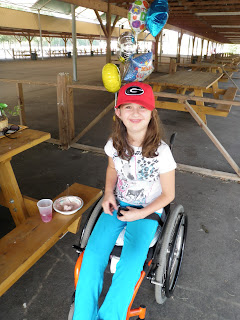 But I have to be honest—Veronica should have been doing this on her own long ago. Before her last foot surgery, she was taking off her tennis shoes and one of her leg braces on her own. But the surgery slowed her down and I have been doing this task on command ever since.
To sum up, I have enabled her to remain disabled and completely dependent on me. Why? I have no idea except to say that I wasn’t strong enough to do the right thing.
Robby and I were talking this morning before I left his house. We always spend our weekends together either at my house or his and saying goodbye gets more painful with each week. This morning we were doing our usual pep-talk that gets us through another week apart.
We realized that we have a little over 4 months until we move in together and begin our new lives as a family.  To me, 4 months is not a lot of time. I began to flip through the tasks in my mind that I wanted to complete before we move in together—making sure my children are independent was #1 on the list.
I realized that my original plan with going to graduate school had been that I would receive small alimony checks for 2 years. During that 2 years, I would try to live off of that money while I earned  my master’s degree, started my new career, and became completely self-reliant financially. During this time, I would also help my children to get used to the idea that I was not going to be around every day after school to cook their meals and help them with homework.
The big idea in my head was to get Veronica completely independent before I joined the workforce. Two years seems like a long time in the beginning. Now my two years has become 4 months and I still haven’t enabled Veronica to figure out how to get her shoes on and off on her own—I began to panic a bit when Robby held up 4 fingers and said, “We only have 4 more months until we are together all of the time.”
﻿﻿ ﻿
﻿﻿﻿

﻿
During the drive home, I zoned out in my head and thought about what I needed to do to get Veronica more independent. I realized that she wants to be independent, but I wasn’t helping her. She wakes up in the morning and gets dressed on her own—something she has only done for the past 3 months. Once she puts on her socks, she screams, “Mom! I need my shoes on now!”
I don’t miss a beat in dropping everything to put her shoes on her feet.
At the end of the day, she enjoys taking a long shower. Again, she has only starting bathing on her own over the last few months. But before she can undress, she sits on the toilet and screams, “Mom! I need my shoes off!”
Again, I drop everything to squat down and pull off her tennis shoes, leg braces, and sweaty socks. It’s tiring and I have been frustrated with the task—never sure when it would ever end.
So today, I handed her the dressing stick and reacher and told her that she needed to try to get her shoes and socks off by herself. This suggestion was met with a tantrum. “What? You know I can’t do that by myself!” she screamed.
I calmly said, “I need to put your brother’s clothes away. Why don’t you see what you can do while I do that and then I will come back and help you.” I walked out of the room while she continued to scream and throw her fit.
I stayed in Jude’s room and listened to her cry and shout, “Mom, please come help me! I can’t do this!” I hung up Jude’s clothes in his closet while she continued with, “Mommy? Mommy? Please help me! I need you, Mommy!”
﻿﻿﻿﻿﻿﻿

If you have a disabled child, then perhaps you have been through this tug-of-war. The only thing worse than having to ignore your child’s pleas for help, is knowing that you are the reason that she cannot do most normal tasks on her own. On my drive home today, I realized that I was the reason Veronica wasn’t putting on and taking off her own shoes. I can blame it on her disability, but the truth is obvious—she is capable of so much more than I allow her to do.
As tears streamed down my face in Jude’s bedroom, Veronica’s pleas began again. I heard her beating her dressing stick on the wall in frustration. I heard her banging her head on her metal bed frame. I heard her gasp for air as she cried in frustration—but mostly I heard fear.
After her father left several years ago, the realization that her mother might one day leave her became a fear in the back of Veronica’s mind. What would she do if she didn’t have me around to dress her and bathe her?
Not forcing this child to man-up and conquer this fear was one of the worst mistakes I have ever made as a mother. I kept hearing the voice of a friend who had to overcome her own disabilities—“She is mad at you now, but one day she will thank you.”
Veronica’s screams began to slowly subside and I heard her begin to try to take off her shoes. I heard a shoe hit the floor and she let out a deep breath. Then I heard the steady rip of her Velcro straps on her braces. I heard her gasping for air and pushing with all of her might.
I finally walked down the hall to take a peek at her. She was sitting on her bed with no shoes or leg braces on. She was pulling off her socks with her dressing stick and refusing to recognize my presence at her door.
After the last sock was off, she looked up at me and said, “There, that wasn’t so hard after all.” We both laughed through our tears.
She stood up on her shaking weak ankles and hugged me tight. She buried her head in my chest and wrapped her thin arms around my waist. “I’m sorry, Mommy. I love you.”
I kissed the top of her head and said, “It’s okay, baby. I love you, too. And I’ve never been more proud of you then I am right now.”
I told her that she is one of the smartest people I know that she is capable of so much, but that she will never know what she can do if she never tries. “And trying is not the same as giving up quickly and making me finish the hard work for you.”
She seemed to get it and she walked down the hall to the bathroom to take her shower on her own. I left her wheelchair in the bathroom and I told her that she would have to get out of the shower on her own and get herself dressed. She groaned a little as I walked out of the bathroom.
She got dressed on her own and even tried to put on her shoes by herself. She said her goal is to be totally independent by summer. I think she will be independent before summer.
And a part of me is happy but a larger part of me is struggling to figure out what my role will be if I’m not the person she is dependent upon for everything.  Taking care of Veronica and knowing that her shoes are on her feet correctly gives me great peace even though I know it is wrong.
I feel like one of those mothers who is overfeeding her fat child because food makes her baby happy and hunger makes her cry. But it’s wrong. It’s wrong to make your child disabled because you can’t stand to hear her cry. I admit I was wrong. I was addicted to helping my daughter. I didn’t know how to stop. I didn’t want to hear her cry. I didn’t want to admit that my time as enabler needed to end. I didn’t want to feel unneeded.
But my job is not to raise a child—it is to raise a woman. I want Veronica to be a strong and independent woman who can go and do whatever she wants whenever she wants and not be tied to me. And today I made the decision to let her go.
It hurts a little to know that I have spent the past 11 years doing everything for my little girl and now that must end. I have no doubt that Veronica will know exactly what to do with her new-found independence. I just pray that I can continue to be a good mom and enable my child to grow up.
Posted by Kim Wade at 10:56 PM