I lost my job

Yes, it’s been a while since I blogged. I’ve had a few people ask me why I don’t do it anymore. My last blog that I wrote in April 2015 kind of covers that so I won’t recap. But life has continued to throw curveballs left and right since then and I’ve tried to find new ways to cope and carry on, but at the end of the day, I realize how much I miss writing the blog and sharing it, so here we go again.


Since I quit writing the blog, I left my job at the newspaper to make more money at a corporate gig. It was a weird transition because I really liked the work and the people I left behind. The corporate gig was great at first. I had my own office and all the perks that go with doing corporate PR. My hours couldn’t have been better and my benefits were amazing. Two weeks into the job, I found out the company was laying off 1,100 people. I knew I would most likely be one—last to hire, first to fire, right? For the next three weeks, I was a crazy mess of emotions, feeling like everything I did was being watched so they would have an excuse to let me go. In the end, it didn’t matter. They said goodbye any way.


I’ve never been fired from a job before. As a matter of fact, I can’t even recall a time when I was pulled into an office to have a talk about something I did wrong. Getting laid off was horrible, but the entire process that goes with it is what made it even worse. 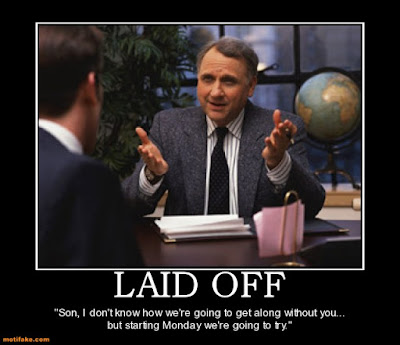 I knew Dec. 16 would be the day they would start the layoffs. I missed work the day before because the stress had finally taken its toll on me and I felt terrible to the point of running a fever. I don’t believe I’ve called in sick to work in years and I don’t think I had been that stressed since I got divorced. That morning, I noticed my boss’s door was closed and morning meetings were canceled. My stomach sank. I sat at my desk trying to work and stay busy and then my boss came in and asked if I could follow her downstairs to the marketing office for a meeting.


This was it, I thought. This is how it ends. I had imagined over and over what I would say and what I would do when I was told I was getting the ax, and now I didn’t need to imagine anymore what will happen. I followed her down the hall and to the stairs. I’m worried I will fall down the stairs because I cannot feel my legs any more. My face is hot and my ears are ringing. We pass a group of women who are red-eyed and sobbing and now I know there is no doubt anymore on where I’m heading.


We get the office and have to sit in silence for what seems like five minutes while we wait for HR to arrive to deliver the “we are downsizing” speech. It’s just me, my two supervisors and an empty room normally used for their big, fancy marketing meetings. HR arrives and my supervisor begins the speech of how I’ve heard of the cutbacks and unfortunately I’m part of that process despite the fact I did nothing wrong and they are really sorry to see me go. Blah, blah, blah.


The ringing in my ears gets so loud I can’t hear anything else he says and I can feel myself starting to cry and now I’m mad at myself for crying. I just want to go home. I have to sit through the HR presentation of my severance package and what to expect and how I should have my attorney look everything over before I sign. I stop crying because I want to just laugh at this point. This entire ordeal is so foreign to me and I can’t figure out how I ended up here in the first place. How stupid to even suggest an attorney to look over my papers. I have no more income, my insurance is immediately canceled and I have two children now without insurance—one of which is disabled—and I drive an old van that is falling apart, and I’m supposed to have my attorney look over the papers to make sure I’m getting “a good deal.” Because if I don’t like the deal, I can reject it? Sure.


The HR man then explains I need to go to my office immediately, clear out my things and be escorted off the property immediately. He then hands me a large, white paper bag with handles and says I can use it for my things. I say, “I don’t want the bag.” He says I need to take it. I say, “No thank you.” He holds the bag out to me and I look at him and stand up and say, “Nope.”


My boss gets up and leads me out and back to the office. I’m not saying a word to anyone; I’m just going to get my things and go home. I just want to go home. I begin cramming everything into my purse that I can including the photo of my children that was on my desk. The photo that was there to remind me every day of why I was working so hard was now a memory of two little faces that would be so upset to know that my new job was gone. How would I tell them?


My boss keeps trying to give me the bag and I finally say what I have wanted to say—“I don’t want that bag and I’m not going to use it. I will not be that person who walks out today with the ‘I Just Got Fired’ bag. Please stop trying to give it to me.” Somehow everything that I want to take with me fits into my purse and in my hands and I’m escorted out. I can hear her heels clacking on the ground behind me, I don’t look back. I don’t say bye. I don’t say anything. I get in my van and start to drive out of the gates and toward home, unsure what I’m supposed to do.


I call Robby and tell him.  I text my former boss and let him know I need freelance work. I get another text from another editor letting me know she has work for me too, whenever I’m ready to start. I end up driving on home and my head is buzzing and I notice I’m about 10 miles past my exit and now it will take longer to get home. I stop at the liquor store and buy a bottle of bourbon and notice it’s only 10:30 a.m. I don’t even care at this point.


I finally make it home. Pour a drink and lay down on the couch trying to figure out what I will do.


That was a low point for sure. But I decided it would not define me. That day I spoke with one of my former editors and he said he was so sorry and asked what he could do to help. I told him, “I’ll be fine. I’ve been through a lot worse than losing my job.” He laughed and said, “Yes, you have.”


And I have, but what I kept telling myself was that there were other people having a lot worse day than mine. I would much rather have to come home and tell my kids I lost my job instead of having to tell them I had cancer or some over disease that was killing me—which is what one of my friends was in the middle of dealing with that very day.


But, I’m not going to gloss over what I went through because a lot of people have gone through what I went through. Losing your job is embarrassing—a lot like having to tell people you are getting divorced. I had nightmares for weeks that I was sitting at my desk working and then I realized I was fired and I tried  to find a way to get out of the building and avoid security before someone caught me.


You get the, “I’m sorry” look from everyone you see. And the “I heard about what happened. What are you going to do?” It’s fine—no one really knows what to say. I didn’t know what to say. But, just like everything else, I got through it. I owned it. I put it out there and I allowed myself to be really sad about it for a while before moving on and hitting the pavement looking for work.


Actually, I’m still going through it on some level. It’s August and I was laid off in December—right before Christmas. I still don’t have a full time job. I’m working here and there doing freelance work, but it’s not quite enough to pay the bills. My unemployment benefits have run out and I’m starting to really worry. I’ve applied to a ton of jobs. I’ve been through a lot of interviews. But still nothing. Not sure why. I could guess—maybe I’m too old, too experienced, not experienced enough, want too much money, don’t have the look? Who knows? I know everyone keeps telling me the right job will come along. I guess it will. And I’m trying not to panic but anyone else who has been through this knows, it’s tough not knowing what will happen from day to day.


Uncertainty can cause a lot of stress in your life. It has certainly taken a toll on me these past few years. At some point, you just get tired of doing the same things over and hoping for a different outcome, right? At some point, you have to just try something new and see what happens. The uncertainty of what tomorrow will bring is hard at times, and even harder at other times. I don’t have all the answers and sometimes I get tired of being that cheerleader who says it can always be worse and it can always get better.


But right now, what I’m really tired of is feeling like I don’t have a right to be mad or that it’s time to stop being angry. I’m not talking about that kind of anger that consumes you to the point that no one wants to be around you. I’m talking about the kind of anger when you just sit and cry and say, “I really need a break.”


They say you should be careful what you wish for—sometimes that is true. And since I’ve realized that you can wish in one hand and crap in the other, perhaps it’s time to stop wishing and just start doing things differently because what I’m doing now is obviously not working.


So, step one, is to start blogging again. Step two, stop worrying about getting a break. Step three? Who knows? Keeping going, I guess. Because life is never going to stop throwing those curve balls so I gotta step up to the plate and stop hiding in the dugout.