It's about time Mr. President

Something really extraordinary happened today. PresidentObama announced his support for gay marriage in our country. I knew he would eventually do this, but I just figured he would play it safe and wait until he was re-elected. I’ve written about my politics before, but I will restate it again. I am registered Independent and I have registered as Independent since I first registered to vote. I despise the bi-partisan system we have set up in this country and I really thought we would have a strong 3rd party system by now. I thought people would get fed up with Democrats and Republicans fighting instead of fixing. But I was wrong.


I thought McCain would form a strong Independent party capable of raising large sums of money after he lost to Bush, but I was wrong. He stayed Republican and he lost.


I thought this whole Tea Party thing would shake things up. But they just got off track and supported the wrong people.


Then there was this whole Occupy Wall Street movement…no offense but it kind of petered out and lost steam. I thought we were angry about this economy? I guess we’re not that angry after all.


So, when I began looking at the 2012 election, I decided to set my sights on the one thing that I wanted to see accomplished in the next 4 years. That one thing has been to see gay marriage legalized. Since Republicans will never go for it, then I had to turn my attention to Obama.


I’ll be honest, I didn’t vote for him last time. I wasn’t sure I trusted him. I was worried about the economy and I was afraid he wouldn’t be able to do enough to keep us from crumbling. 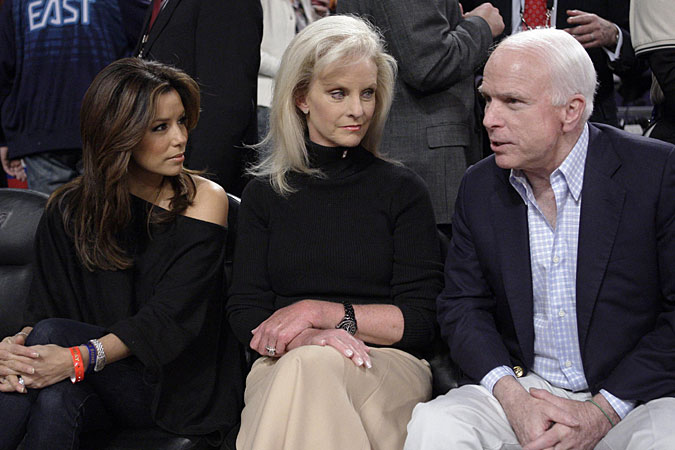 I really hadn’t made up my mind until I went into the voting booth. I had like McCain ever since I read a book in college written by a man who was a POW in Vietnam for 7 years. His story was incredible. He wrote about McCain and what he did for the men in the camp.


McCain was the son of a high-ranking admiral. The Viet Cong wanted to trade McCain for some of their guys, but McCain refused the trade. He went out of his way to make the Viet Cong torture him because he knew they couldn’t kill him—he was too important. I was stunned by that story.


Unfortunately he later came home and left his wife who had stayed behind and supported him and his children. She was disfigured from an auto accident she suffered while he was imprisoned. He left her for a much younger woman and never really paid much attention to his children.


This dichotomy of personalities really bothered me when I thought about voting for him. He was a hero who turned out to do one of the worst things a man can do—leave his wife and children. But ultimately, I felt that the economy would be in better hands with him, so he got my vote. But in the end, I was very okay with Obama winning. I got chills on election night when he walked on stage and gave his speech—I was glad my children were able to remember the election of the first black president. It was an exciting time to be an American.


For the past 4 years, I’ve just been sitting back watching Obama. I don’t feel like he’s done anything amazing but I know he hasn’t done anything disastrous. Our country has evolved pretty much the way I thought it would.

But I decided about a year ago, that I would definitely vote for Obama this time around. I feel like these next 4 years are going to be game changers for this country. I know he is the only person who will help this country move toward legal gay marriage and I also think he was some big plans in his back pocket that he has been holding onto since he got elected. I’m excited to see what he does for this country.


I have raised my children to be open-minded and not judgmental.  They know several gay couples and they love them dearly. They don’t think that there is something wrong with these people—they see them for who they are. They are people in love just like everyone else. They are no less than anyone else and they should have the same rights.
Veronica came home from school several months ago and told me about a lesson they had at school during black history month where they learned about how it used to be illegal for blacks to marry whites. She couldn’t believe that was true. “Why did that happen, Mommy?” she asked. “Sophia’s mom is white and her dad is black and they love each other. How is that wrong?”


I told her that it wasn’t wrong—it was just people who didn’t know any better.”


She said, “Kind of like how some people say it’s wrong to be gay and it’s not legal to get married if you’re gay?”


“Yep,” I said. “It’s exactly like that. Hopefully one day someone will change that.”


She looked at me and said, “I think Barack Obama will change that. He should know what it feels like to be discriminated against. And did you know that his mom was white and his dad was black?” 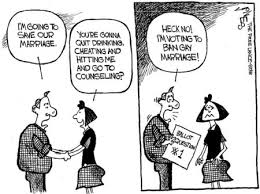 
“I wish they would change the laws so that Aunt Mary could move to Georgia and be closer to us, but she can’t after she gets married,” she said. “I just don’t understand why people have to hate. What if they said that people who wear leg braces couldn’t’ get married then I would never get to marry someone and have children.”


And I thought to myself, “There probably are people who feel like you shouldn’t get married and have kids because you are disabled.”


But I told her, “Veronica, all we can do is wait for people to come around and change their minds. I think it will happen one day. I hope it happens soon. We are too smart to not realize how much this division hurts our country.” 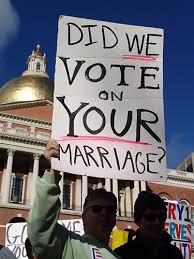 You don’t have to agree with me. I understand. Beliefs and faith are hard to change. You can’t just believe that being gay is sinful your whole life and turn it off like a switch—I get that. I used to believe a lot of stuff about life until I hit rock bottom and realized that I was a judgmental fool who was no better than anybody else.


So, for those of you who are against our president right now for what he said today, I have a prayer for you. I pray that something happens to you to make you change your mind about gay marriage. I hope you see a marriage like my last one and realize that heterosexuals are already doing a great job at giving marriage a bad name. I hope you meet a child somewhere that you are awed by and find out he was raised by gay parents. I hope your child has the most amazing year at school and you find out her teacher is gay and you feel bad knowing he can never adopt children because your state won’t allow it.  I pray you quit being so judgmental and take time to answer the question, “what is it about gay marriage that really bothers you?” And if you claim your religion, then I pray for you to find a different one.
Posted by Kim Wade at 9:45 PM