Today is Arthrogryposis Awareness Day. If you don’t know someone with Arthrogryposis, then you probably have no idea what I am talking about.

My daughter Veronica was born with Arthrogryosis. It’s a congenital condition that causes the joints not to form correctly. Considering the fact that the body has over 300 joints, there are many variations of this disease.


Despite the fact that Veronica has a hard time walking and bending her knees, her case is actually quite mild compare to most of the other children we have met with the disease. When Veronica was born, she had clubbed feet, her left arm didn’t move, her hands her pulled toward her inner forearms, her head was cocked to the left side, her knees didn’t bend, and her hips were dislocated. I was told she would never walk.


But after the hell I had been through with trying to diagnose her, walking was the least of my concerns. I just wanted her to live.


And boy has she lived. There is something very unique about all the Arthrogryposis children I have met at different children’s hospitals and Camp Just Like Me. They seem smarter than most children and they have an amazing sense of humor. And it’s not just my motherly pride talking--I’ve had doctors tell me that they have observed the same mannerisms.  Their smiles are inspiring and they grow up to do amazing things as adults.


I have been extremely lucky with Veronica. When she was first born, we lived close to Seattle where they have one of the few Arthorogryposis clinics for children. Veronica was seen by their doctors when she was 5 days old and I believe that is the reason she can walk and use her arms today.


We are also lucky that we have met other children and adults with Arthrogryosis. Some people live their entire lives without meeting anyone just like them. It is a relatively rare disease that occurs in about 1 in every 3,000 births. I had never heard about it until the day the doctor told me my baby had it and even the doctor couldn’t pronounce it correctly.


I have also been very lucky in the fact that I had insurance when Veronica needed it. There was about 8 months after my ex-husband left that I couldn’t get insurance for her and my ex-husband refused to provide it. You see, Arthrogryposis is one of those pre-existing conditions that private insurance companies refuse to cover--that is why I support the Affordable Care Act. No one should ever be stuck without health insurance like I was. Not being able to take care of your child’s health is a nightmare, and people need to understand that anyone can end up losing their health insurance at any time.


But I think everything happens in life for a reason. It’s hard to raise a special needs child but compared to most parents with special children, I have it pretty easy. Veronica has never been on the brink of death. She is very intelligent. She has a lot of friends and she is very social. Sure we have spent a lot of time in the hospital and it’s frustrating to know that there are things in life that she will never be able to do like run or wear sandals, but I can live with that. 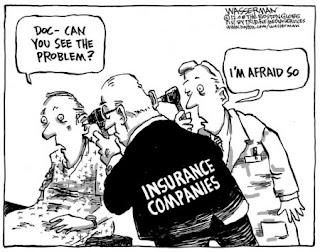 I do know that I find myself in situations where I get to be the person in the room who has advice for parents like me. I get to take all the knowledge I have accumulated about doctors, hospitals, physical therapy, dressing devices, leg braces, special tennis shoes, wheelchairs, and health insurance and share that knowledge with people who need it.


A few days ago, I got a call from a woman who needed help writing a thank you letter to the newspaper. Her son was diagnosed with a rare brain tumor and he didn’t have health insurance because he chose to become a youth minister and the job didn’t come with benefits and he couldn’t afford private insurance. The community has rallied behind her son to help raise money for his care which must be paid prior to his treatment, and she wanted to write a letter to thank everyone.

I would have thought that she just needed my help writing the letter, but she really needed something else. She needed another mother who could understand what it is like to want to help your child, but finances and health insurance are holding you down. I told her about how I lost my health insurance when my former husband left the military and took a new job without adding the children to his new insurance plan and how humiliating it was to tell hospitals that I didn’t have insurance for my children. I tried to get a private plan that would cover Veronica, but there aren’t any. I couldn’t get her on Medicaid, because I wasn’t legally separated and my former husband made too much money to qualify and he refused to sign my papers for separation.


I told her something that I wish someone would have told me, “Never feel ashamed for not having the money you need to take care of your child. We all do our best, but sometimes things become too much and we fall short. These moments make us stronger and you must hold your head high.”

I also gave her some advice about how to get around certain hospitals with key phrases like “what is your quick pay charge?” I also admitted to her that I still didn’t have health insurance for myself. “I can’t afford it right now and I don’t have a full-time job that gives health benefits.” She looked at me and said, “You need to fix that as soon as you can so you don’t end up like me.”


As I drove home, I called Robby. “I need you to add me to your health insurance plan.” I realized how lucky I am to have that option now.


No matter what your political views are, we all have to agree that the health insurance system in our country needs work. We have the best medical care in the world and it is a shame not to give access to the people who need it the most. Should it be free? Of course not. But it should at least be accessible when you need it—especially when your life depends on it.
Posted by Kim Wade at 8:47 AM