So, it seems the political climate in our country is about to go from boiling hot to mother-of-god-that-burns. I hate election years and I really hate this part of the election year. Facebook is no help either…the sidebar to the right keeps telling me which of my friends is voting for Mitt or Obama or likes Chick-Fil-A or likes things made in America. And sadly I find myself silently judging those around me for their “likes” and “dislikes.” I’m a reformed conservative who called herself Independent from day one because I refuse to make a choice and align myself with an entire political party—I’m the most judgmental of the political parties unless you count Libertarian (which I won’t since their votes never seem to really make a difference in the race for president).

But I realized something today and it made me angry—we are arguing over politics but what we really should be arguing over is money. Of course no one likes to argue over money—except maybe Libertarians and that’s only because they get the luxury to look at an issue rationally since they get to try to prove two parties wrong instead of blaming everything on a liberal or a conservative like normal people do.


I think it is bad that we have politicized things that don’t need to be politicized—abortion, same-sex marriage, education, and healthcare. Why should it matter what political party you are if you think that abortion is always wrong? Does that mean that pro-choice people are also pro-abortion? Does that mean you have to be pro-life to be a Republican? When did they get to put their stamp on pro-life? And who isn’t pro-life? We are all pro-life, aren’t we? No one that I have ever met is pro-death—and I have even met women who were raped that got pregnant. Why do you have to be liberal to say that Obama care is a good plan? What if you are a Republican and you can’t get health insurance for your disabled child because your job doesn’t offer health benefits and you can’t get a private plan to cover pre-existing conditions and you make too much money to qualify for Medicaid? Then you should say, “My kid can go without because I’m Republican and I refuse to agree with a healthcare plan that covers pre-existing conditions.” That’s stupid. Healthcare is not political, but it’s hard to see that when you are not faced with loss of benefits or disabled children with no health insurance. As a parent who lost my coverage and couldn’t take care of my daughter’s medical needs for a year, I can tell you that Obama Care sounds pretty damn good and it would be nice to hear a Republican agree with me.


And yes, there is same-sex marriage. You already know how I feel about that. Is Dick Cheney less of a dad because he chose to align himself with his political party over his gay daughter? My answer is yes. Politics doesn’t belong in adult love. You know, the kind of adult love that isn’t considered “forcible sex.” Perhaps the Republicans would find it interesting to know that gay sex is the only sex that never results in pregnancy so perhaps homosexuals have no need to be pro-choice because they have no choices to make? Maybe they are all just pro-life? But wait, they can’t be because that would make them conservatives and we all know that if you are gay, you have to be liberal because politics has somehow made its way into consenting adult relationships.

And now on to education—the platform everyone seems to embrace but no one wants to do anything about. I will gladly admit that I mad as hell at Obama for doing NOTHING for education since he has been in office. There was that one week when he addressed getting rid of No Child Left Behind, but then we never heard another thing about it. Why is education a political debate anyway? I’ll tell you why—it’s all about money. And our money is not being spent correctly and we can’t figure out who is more wasteful with the spending because it’s everybody—Democrats and Republicans should be ashamed of themselves for what they have done to this country.


About 10 years ago, I sat at a table with my dad and we talked about politics. I told him that I truly believed we would begin to see a strong 3rd party emerge and all these democrats and republicans would have to change their tune. They would have to navigate to common ground or else the Independents would take over and win every election. I believed that notion—I thought I understood politics.

And now, here we are at 2012 and we are still a 2-party system with Democrats and Republicans tearing each other apart and polarizing our nation. I don’t like either one at this point. I can’t vote for Mitt because I don’t agree with his stance on social programs, same-sex marriage, abortion, or the economy. I don’t feel great about voting for Obama because he should have done something about education these past 4 years. I love his healthcare plan because it works for me (I understand it doesn’t work for everyone and I respect that), but he should have multi-tasked and done more. But then how could he do more with the Republicans blocking his every move. And they don’t block moves because they are right; they block them because they are polarized. The democrats did the same things to Bush.


So, I’m taking a break from politics for the next 3 months. I’m going to ignore your political signs and rallies and commercials. I’m going to just shake my head and nod and say, “I really don’t follow politics.” 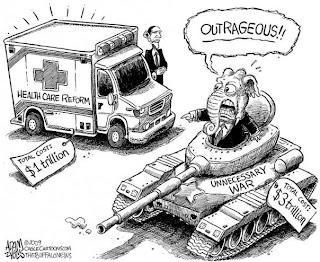