Chicken sandwich with a side of fried hate

For the past 8 months, I have avoided eating at Chick-Fil-A. My sister-in-law posted a link on her Facebook page asking people not to support the fast food chain because they donate money to groups who strive to squash the legalization of same sex marriage (over $2 million to be exact).


I did my reporterly duties and checked out her story and indeed she was correct. So, I quit going to Chick-Fil-A and I tried to make Robby feel guilty about eating there.  My children love their chicken nuggets and the fact that they are not made out of that pink slime is a plus. I also enjoy their Caesar chicken wrap even though it is not something anyone who doesn’t want to be covered in bits of parmesan cheese should eat in the car. But I can cut Chick-Fil-A out of my life without any sadness. After all, I adore my sister-in-law, and I would feel like I was stabbing her in the back if I gave the fast food chain any more of my money.


I don’t have a lot of money these days anyway, so I try to be careful where I spend the little bit I do have. I don’t want to give my money to people who support these political actions against same sex marriage. Chick-Fil-A claims they are not political, but when you begin donating money to groups who support political action against same sex marriage then you become political—pretty sure that is what the Bible says or perhaps I am also misinterpreting the word of God, too.

Now with the recent storm of press about Chick-Fil-A, I get the chance to see what my friends are saying about the controversy. I think most of them are familiar with the fact that Chick-Fil-A is a Christian-run business and they are not surprised about the news. I doubt it will affect their eating habits and Chick-Fil-A will probably survive this recent media blitz. I mean, we are southerners and we love to eat fried chicken made by church-going Baptists.


I read the recent comments from one of the presidents of Chick-Fil-A, and I have to admit that one of his comments really struck a chord with me. In an interview with Baptist Press, he said, “We are a family-owned business, a family-led business and we are married to our first wives.”


At that moment, I realized that he is not worried about the sanctity of traditional marriage-- he just hates homosexuality. The stance of Chick-Fil-A has nothing to do with marriage because if it was about marriage, then Chick-Fil-A would be doing something about marriage values in this country. I mean they have power to put their message on any of their products, but they choose not to?

Why not put statements like “adultery is wrong” on their waffle fries or “quit cheating on your wife” on their shakes? I mean, aren’t they super dedicated to protecting the sanctity of marriage in our country? ($2 million buys a lot of "save marriage" ads). Doesn’t the Bible call for product placement in conjunction with spreading God’s word on the sinfulness of divorce? Or is that another misinterpretation of the holy word? I’m confused about Chick-Fil-A’s role in preserving traditional marriage. I believe preserving means you actually do something about it? But what do I know? I’m just a simple girl with simple values.


And from his statement to the press, I can see the leader of Chick-Fil-A is also the same kind of person who looks down on people who are divorced. I mean after all, he is married to his “first wife.” Well, crap. He must know something about the Bible that those of us who are divorced missed. He must be closer to God than me because I am one of those sinners who is married to my “second” spouse. I guess my “second” marriage also spits on traditional marriage values. Because we all know the Bible is all about keeping that “first” marriage sacred—I mean as long as you don’t look to Abraham oranyone in his clan for traditional marriage advice.

These people at Chick-Fil-A aren’t worried about traditional marriage values, because if they were they wouldn’t use the Bible as the foundation for those marriage values. Because for those of us who have actually read the Bible, we can see that the men in the Old Testament didn’t seem to have a problem with taking a younger woman into their “traditional family” in an effort to tack on a few extra sons. We can also see the part in the Bible about God’s love for ALL of his children. And for those of us who can read, we know that the phrase “Same Sex Marriage is a Sin!” is not in any Bible—not even the King James version.


I’m sure if these guys at Chick-Fil-A could go back in time, they would be the same guys making the claims that “if God wanted the races to mix then he wouldn’t have put them on different continents.”

But I guess it should give me hope to know that the same people who used the Bible to keep blacks and whites from being able to legally marry in this country are the same people who are trying to keep homosexuals from having legal marriage rights, too. They failed back then and eventually they will fail on this issue.


I guess we will always see people who hide behind the Bible and distort the “word of God” in order to keep people they don’t like away from them. And I guess we can all choose which side of the line we will stand behind and which fast food chain we will visit.


In the end it is just sad, but at least we are talking about the issue at hand. At least I get a chance to see what side of the line my friends stand behind. 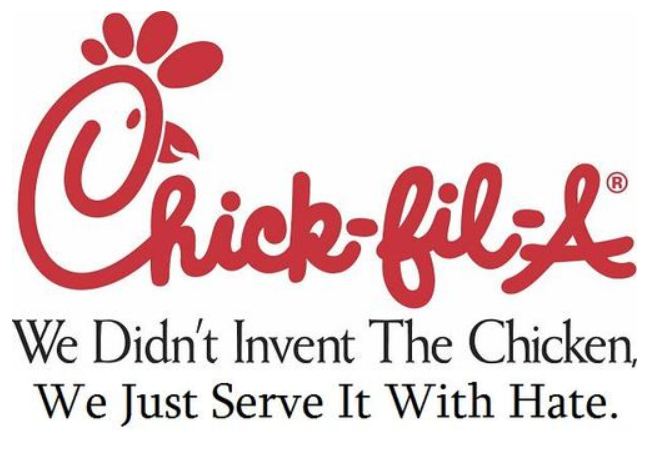 But I also get to realize that I really don’t have as much control over the situation as I would like. I realize that my voice is drowned out by the political machine that controls this country. And to sum it up, I get to see just how little control I have in my battle against people like Chick-Fil-A.


I picked up my son from play practice last night and I asked what my $5 bought him for dinner at the theater.  His answer was simple— “Chick-Fil-A. And mommy, I think they make the best chicken sandwich.” So much for my line in the sand, but at least it opens up the opportunity to speak to my children about the link between fast food giants and bigotry. Because teaching your children to make a stand against evil and love everyone is important—that actually is in the Bible, a lot.
Posted by Kim Wade at 9:18 AM